XP2009 was a nice experience. The Flamingo Hotel outside Pula in Sardinia might not have been on par with a normal Scandinavian hotel when it comes to Internet Access, hot water, and definitely not on par with Italian restaurants when it comes to food. But as usual the people visiting (139) are exceptionally experienced, nice and willing to share and contribute.

My workshop ran on Monday afternoon as planned with dozen+ people. The workshop was presented in the program with its initial title and description, so me acting on the workshop commitees feedback never made it to the actual program. But me and Andreas ran it using staying on the topic listed in the program, “Coaching Agile in Large Scale Development” as well as the ideas and discussion topics of the participants.  Jutta Eckstein participated and contributed much of her extensive experience.

Jutta proposed a discussion around “Creating a Agile Community”, supposedly as a means to inject Agile thinking and that way creating or sustaining an Agile Transition. This actually became the most important topic and after extensive discussions about what a community actually is and how to create a special one on Agile topics, we actually concluded two important things:

First, don’t try to create a new Agile community to initiate change. A new community is hard to start, and you will get limited leverage by talking to believers. Instead find the communities that already exist, and there probably are a lot already. A community is a set of people with some relation to each other, for example that they share some interest; the development team, the lunch buddies, the java experts, the sci-fi readers and the art club. Not everyone of these can be leveraged for an agile transition, but you could probably find something from the agile toolset or value base that you (or someone) can inject in most of them. But you probably shouldn’t advocate agile as such in each and every one, but stay on the topic of the network, for example talk about jUnit and how to leverage that on the Java Expert Community. And of course we talked about using the techniques from “Fearless Change” by Linda Rising and Mary Lynn Manns.

Secondly, try to create a new Agile community, but not to initiate change. Use it to make sure that the belivers, the coaches and the change agents have somewhere to draw strenght and inspiration from. Change isn’t easy so the people that try to sustain change need every piece of support they can get. 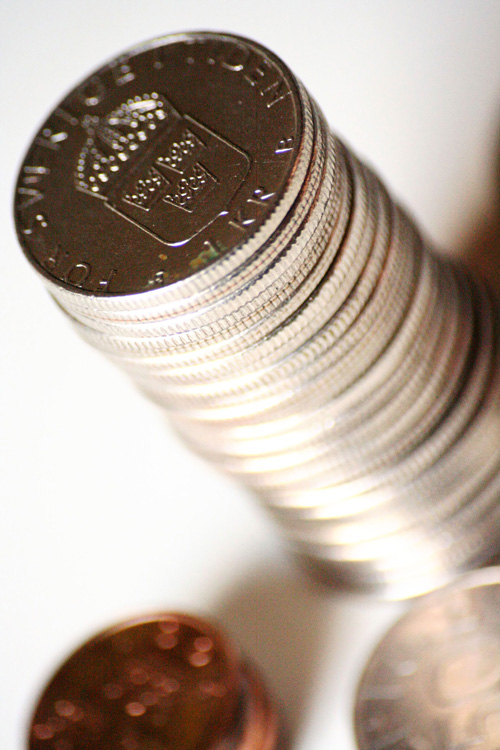 I went to Budapest last week to do a workshop with the local management team of one of my customers. The goal was to talk to them about how they could move into the agile way of working. This was triggered by a move of some substantial product development from Sweden to Hungary. In Linköping, Sweden, I have been coaching a dozen teams in a transition to Agile, and I was asked to help the management to ensure that the transfer retain as much as possible of the Agile way of working that we have established.

I decided to select a few exercises, and add a set of scenarios that we could analyze together. I was hoping that the exercise would give them first hand expericene in the values of Agile and that this and the scenario analysis would spawn good discussions. And it did. Actually, I did only use one of the exercises I planned.

The exercise that I used was from Tasty Cupcakes and is about sorting coins. We use that exercise extensively in our Agile training, so I knew it would work, but I decided to add a few twists.

The exercise is to ask the group, preferably divided into teams, to estimate how long it would take them to sort a set of coins. The team with the lowest estimate actually get to do the sorting.  This raises the level of competitiveness in the group.

I decided to add a “Requirements Specification” to the game. Instead of telling the team what it was about I had prepared a document stating that they would get a number of coins of various value, how high piles could be, how far apart they where allowed or required to be placed and some other facts. (An unplanned complication was that I had stated distances in millimeters and a couple in the group where actually Irish…)

So after a “pre-study” period the bidding commenced. As often happens one group had a low bid and the others said “Let them do it!”

The team were actually done on time, which is kind of a bonus. Because the kicker is that almost always the coins are sorted according to value although that has never been specified.

I think adding the written “Requirements” shows how easy we are thrown of track by something written. It’s not just the fact that written communication is narrow-band, it is also very often misleading since if someone has spent so much time writing the document, specifically if it also has been reviewed and approved, the truth must actually be in there somewhere. And everything in it must be equally important, right?

Of course, the 10,000$ question that someone should ask is how you actually want them sorted. (Occasionally this question is actually put during the bidding and then you can either try to be undecisive, misleading, or you can just take it from there.)

But the billion dollar question that I really want to hear is “Why do you want them sorted?” I had prepared an answer: I want to be able to sell piles of coins as birthday presents so all the coins should be from their birthyear. I hope that I will someday do this exercise and have to use this answer.

By the way, at the end of the workshop one of the managers said “So I think we cannot wait for the transfer to be done and then start becoming Agile, we must do this now”.